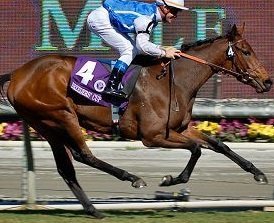 Anyone who loves racing has heard of Goldikova even if they were too young to pay attention when she won her third Breeders’ Cup Mile on the turf at Churchill Downs in 2010. Her passing at the age of 16 was announced on January 6 by Pierre-Yves Bureau, racing manager for her ultra-wealthy owners and breeders, the Wertheimer brothers.

No other mare, colt or gelding has ever won the same Breeders’ Cup race three times. Goldikova’s record-breaking performance was a testament to her extraordinary will to win, exceptional talent, her physical and mental toughness and the skill of her trainer, Freddy Head who shipped her from France each time.

It probably helped that she was always ridden by Olivier Peslier too. He is one of the most respected jockeys in France and can be relied upon to provide top quality feedback after a race. He has ridden countless champions but has never partnered a mare like Goldikova.

Goldikova’s resume features 14 Grade/Group 1 wins but she was never the most impressive horse in the pre-race parade. She was not the biggest or prettiest mare but the people that knew her best realized that she was extraordinary in other ways. Like Giant’s Causeway, another ‘iron horse’, she had an abundance of attitude that enabled her to battle hard in a race. Like him, she made visitors to her stable extremely unwelcome and they entered it at their peril.

Goldikova started favorite in all three of her Breeders’ Cup wins and was fancied to follow up on her fourth run in the race as a six-year-old in 2011 when she was sent off as the 5/4 favorite. She was only beaten a length into third place by the 50/1 shot Court Vision. Both Court Vision and the second placed Turallure had been held up whilst Peslier had tracked the pace and taken the lead a furlong from home only to be headed 100 yards from the wire by horses with more gas left in the tank.

It was a disappointing result in her final run as she had demonstrated her class but was denied a fairytale ending to her illustrious career on the racetrack. The two horses who raced ahead of her finished at the back of the pack of 13.

This daughter of Anabaa out of a Blushing Groom mare won 17 of her 27 starts and amassed over $7 million in prizemoney. She announced her talent promptly as a two-year-old. Sent to Freddy Head in 2007, she won both her starts as a juvenile at Chantilly without breaking a sweat and finished a minimum of two lengths ahead of her closest pursuers.

Extremely soft ground was probably the reason for her defeat on her debut as a three-year-old at Longchamp in April 2008. She was narrowly beaten when giving 8lb to the winner, Andre Fabre’s Azabara. A month later she contested the Group 1 French 1,000 Guineas at the same track. Something was clearly troubling her that day, she did not want to go into the gates, unseated Peslier and stumbled out of them. Goldikova recovered her composure once the race was underway but had the misfortune to encounter the all-conquering Zarkava who beat her two lengths into second.

Third time out that season she was tried over a mile and a quarter for the first time in the French Oaks. She raced prominently as usual and took the lead after a mile but was outpaced by the turbo-charged Zarkava who was held up and unleashed by Christophe Soumillon. She finished third, beaten four lengths and was narrowly denied second place by another closer.

A drop in class to a Group 3 and a return to her optimum distance of a mile in July was a great call by Head. Goldikova always wanted to get on with the job, racing keenly and was never going to settle at the back of a pack. Peslier tracked the leaders and powered clear two furlongs out providing a confidence boosting win that was start of an impressive sequence of four victories.

In August the same tactics provided a Group 1 win at Deauville when she started third favorite and won by half a length. A month later she raced against colts for the first time in the Group 1 Prix du Moulin de Longchamp and, ridden exactly the same way, succeeded by the same distance.

Next time out Goldikova started as the 9/4 favorite in the Breeders’ Cup Mile at Santa Anita and produced an electrifying burst of speed on the firm ground to win by over a length. She was much smaller than most of her rivals but was not intimidated by them. She was the only three-year-old filly in the race and Peslier could not ride at her allocated weight so she shouldered an extra 2lb. It was an extraordinary spectacle, the small filly made the massive males look slow.

Unsuitably slow ground was judged by Peslier to be the reason she disappointed in her debut as a four-year-old. She was a beaten favorite in the Group 1 Prix d’Ispahan in May 2009, finishing seventh, more than ten lengths behind the winner. It was the only time she finished out of the first three.

Goldikova encountered a more suitable surface when she traveled to England for the Group 1 Falmouth Stakes at Newmarket for fillies and mares in July and returned to her winning ways. Back in France, soft ground did not stop her winning the Group 1 Prix Rothschild against her own sex in early August. Two weeks later she was not entirely happy to be racing again so soon and, although reluctant to load, she beat the boys by six lengths in another top-level contest, recording her greatest margin of victory.

A narrow defeat over seven furlongs in a Group 1 at Longchamp in October did not put bettors off when she lined up at Santa Anita for her second Breeders’ Cup Mile. She was sent off as the 13/8 favorite and produced scorching late speed on the firm ground to score by half a length. That performance secured her place in the affections of US bettors who were impressed by her determination.

Goldikova’s five-year-old season was sensational, she won five of her six starts including the prestigious Queen Anne Stakes at Royal Ascot in June. Her only defeat came on testing ground when she was beaten into second by Makfi at Deauville in August. A barging match with a larger colt on the first turn at Churchill Downs next time out in the Breeders’ Cup did not compromise her chances. She scored by nearly two lengths beating Christophe Clement’s Gio Ponti.

Goldikova was still a force to be reckoned with as a six-year-old. She followed the same schedule and scored twice in France and was runner-up three times before her final Breeders’ Cup third placing. Her consistency during four seasons was exceptional and she captured the hearts of racing fans across continents.

She was retired to the Wertheimer’s breeding farm in Ireland and produced six foals for them. Her offspring have not inherited her level of ability. The best of them, Terrakova, a filly by Galileo, won the Group 3 Prix Cleopatre and finished third in the Group 1 Prix de Diane in 2017.

The bespectacled Wertheimer brothers Alain and Gerard reportedly have a combined fortune of approximately $30 billion. They own the Chanel fashion brand, vineyards and a substantial horse breeding operation. They should appreciate that Goldikova was priceless.

Fiona Derek is our horse racing expert. She has lived and breathed horses from a young age, having been involved in the horse racing industry both riding out for racehorse trainers and in an amateur training capacity.